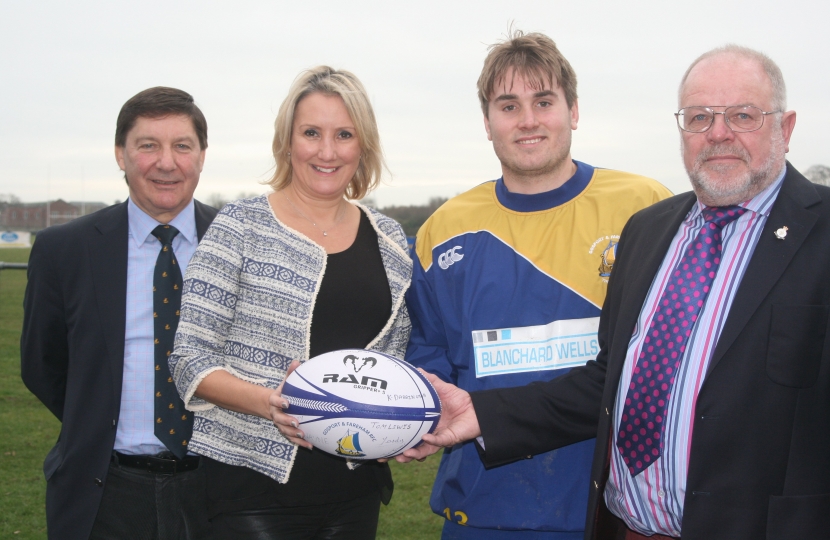 Caroline backs the ‘Daily Mile’ which takes place at a number of schools in our area, encouraging children to get out of the classroom for fifteen minutes every day to run or jog, at their own pace, with their classmates, making them fitter, healthier, and more able to concentrate in the classroom.

She is also a keen supporter of the innovative 'This Girl Can' campaign, which aims to encourage more women and girls to get involved with sport.

Caroline has been along to support local sports teams such as Fareham & Gosport Football and Rugby clubs, the Solent Devils ice hockey team, has been leapt over by the Tigers Motorcycle Display Team, and has seen the Goshawks and SUKI gymnasts in action.

Caroline campaigned hard to change the original route to ensure that the Olympic torch came through Gosport in 2012 and was proud to hold the Olympic Flame as it travelled across Portsmouth Harbour on the Gosport Ferry!

Gosport MP, Caroline Dinenage, has welcomed the news that the Fan Led Review of Football Governance has been published today.

Gosport MP, Caroline Dinenage, has welcomed the news that a fan-led football review –promised in the 2019 General Election which Caroline was re-elected in – will be going ahead.

Gosport MP, Caroline Dinenage, has written to Gosport Borough Football Club about new, emergency funds worth up to £27,000 that they are eligible for through the National League football fund.

Caroline goes for gold with Mondelez!

Local MP, Caroline Dinenage, is encouraging her constituents to get together with friends, family or colleagues for a Great Big Kickabout to raise vital funds for Soccer Aid for Unicef over the weekend 14-16th June.

Local MP, Caroline Dinenage, visited the local Ladbrokes shop in Stoke Road to place a £25 charity bet ahead of the Grand National.

If re-elected on 8th June I will continue to push for better local sports facilities.

Sign up to hear from Caroline on sport, fitness and other local issues