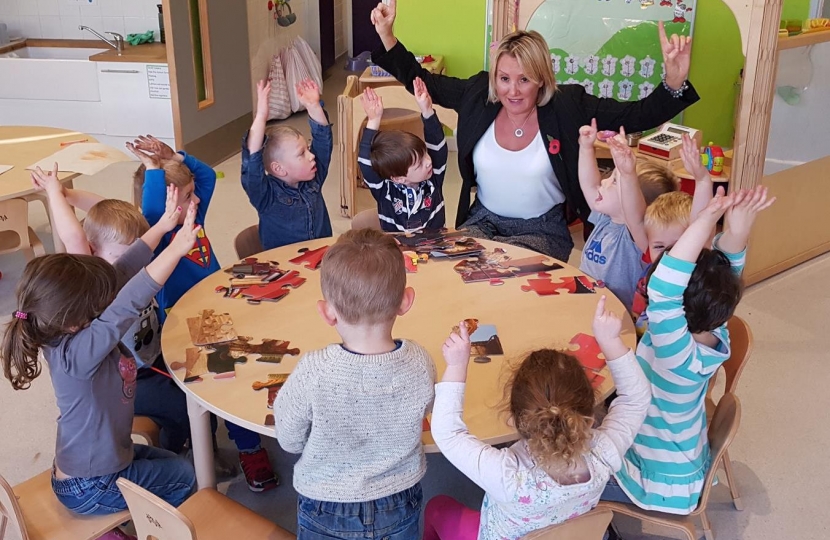 Caroline wants all children to get the best possible start in life. Since her election, she has visited each of the 39 schools and colleges in her constituency, meeting with hundreds of teachers and pupils to discuss their achievements and the challenges faced by schools in the area. She has also welcomed many local schools and home education groups to Parliament, taking part in lively Q&A sessions with pupils of all ages.

Formerly serving as Early Years at the Department for Education, Caroline has a great deal of interest in schools and education both locally and nationally. As Minister she was responsible for the implementation of 30 hours free childcare, which came into force in September 2017, and fought against Sure Start Children's Centre closures, raising her concerns in Parliament and locally. She also played an important role in securing new sports facilities at Bay House and Bridgemary Schools.

Caroline has been involved in a number of competitions and campaigns to support and encourage children in school. Most recently in April 2019, she won the star prize in a digital currency competition, winning £10,000 for local schools which she divided amongst them. Each year she also runs a Christmas Card design competition, which all primary schools in her constituency can take part in. The winning design is featured on the front of Caroline's Christmas Card, with the runners up featured on the back. As a member of the Parliamentary Inquiry into Child Safety Online, Caroline took part in the campaign for children’s online safety, also holding a Cyber Safety event in the constituency, to help local parents be confident with digital parenting. In a bid to encourage more young people to get into STEM (science, technology, engineering and mathematics), Caroline has been a keen supporter of Gomer Junior School’s gSTEM project, bringing ministers to see the learning in action. In March 2019, the Secretary of State for Education, Damian Hinds, accepted her invitation to meet with local head teachers and open the new Gosport STEM Centre.

As a keen businesswoman, Caroline has hosted many business events for senior school pupils. At Bay House School, she welcomed Baroness Karren Brady for a business and entrepreneurship workshop. At Bridgemary School Jacqueline Gold CBE and a cohort of successful local businesswomen helped Caroline to host an Enterprising Women event for female students from Bridgemary and Brune Park schools.

In helping to secure funding for the CEMAST Centre at Daedalus, Caroline has fostered training for over 100 engineering students. Caroline also backed the funding to build hotel CETC based at Daedalus. “Digger School” is an innovative collaboration between construction businesses and Fareham College that offers practical training, which mean apprentices are 'work ready' after an intensive 20 week course in Civil Engineering and Groundworks. Caroline took Skills Minister, Anne Milton, to visit CETC to see their unique offer of apprenticeships.

She has promoted apprenticeship schemes throughout the area, and even completed her own mini-apprenticeship as a Barista at Costa Coffee on Gosport High Street. She also ran a campaign to shine a light on the diversity of apprenticeships in the Gosport constituency, which culminated in the learners being invited to Parliament and greeted by the then Apprenticeships and Skills Minister, the Rt Hon Robert Halfon MP.

In the belief that education and re-training opportunities should be available to people whatever their age, Caroline worked hard to save adult education outreach resources when the Rowner RSR closed and was delighted to help secure the new improved service at the Nimrod Centre. The 'Out There' project was hailed as a European example of excellence and a blueprint for other adult education schemes. The project moved to St Vincent College in 2018 and was rebranded "Choices @ The Clocktower".

Through her engagement with Gosport based reading programme 'We CAN Read', Caroline developed a passion for boosting basic skills among the adult population. She led a landmark debate in the House of Commons on adult literacy and numeracy and played a key role in securing a BIS Select Committee Inquiry into adult literacy and numeracy issues. She also formed an All Party Parliamentary Group for Maths and Numeracy with cross party support and was Co-Chair of the group.

Caroline calls on residents to make their voices heard!

Last week, the Government has announced a further £80 million investment into music hubs across the country to benefit thousands of children.

Local MP, Caroline Dinenage, is encouraging all local Sixth Form colleges and Academy schools to bid for a share of £400 million that the Government has committed to school improvements.

Today it has been announced that South East schools will benefit next year from a £282 million increase in funding - a 4.8% real-term increase.

Caroline says ‘Have your say’!

Local MP, Caroline Dinenage, is inviting everyone in the Gosport Constituency to get involved in UK Parliament Week and ‘have your say’ on the issues that matter to you most.

The Government has announced that a record £14 billion will be given to schools across England.

Local MP, Caroline Dinenage, is encouraging people to take up a role as a School Governor.