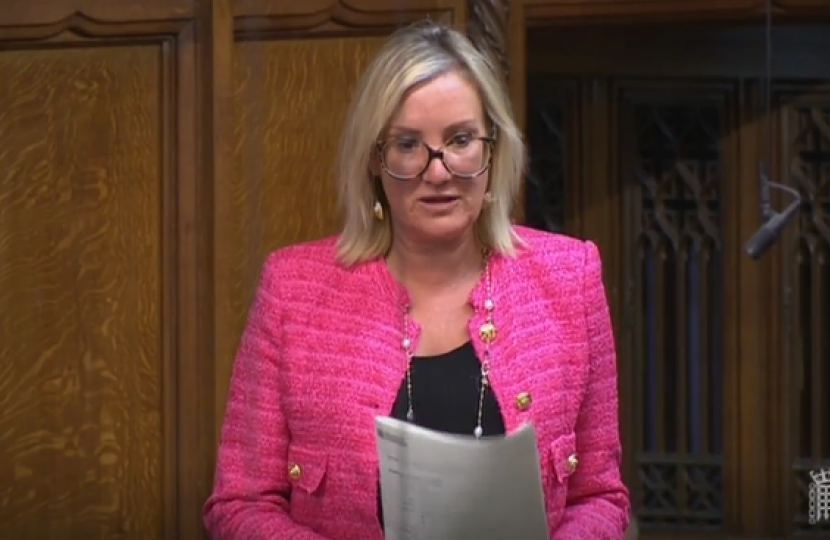 Local MP, Dame Caroline Dinenage, today asked new Secretary of State for Health, Steve Barclay, if he would restate his department’s commitment to publish a 10 Year Cancer Strategy including a Childhood Cancer Mission.

Caroline’s question was inspired by her 10 year old constituent, Sophie Fairall, who died last September following a year-long battle with an aggressive cancer, Rhabdomyosarcoma.  Caroline has been working alongside Sophie’s mum Charlotte to push for Paediatric Oncology to be at the forefront of Government plans to improve the way we detect, treat and care for cancer patients.

"I would like to welcome both the Secretary of State and the new Minister to their place, and warn them that the one statistic that they are going to hear me say time and time again is that cancer is the biggest cause of death for children under the age of 14.

"Both of their predecessors met with my constituent, Charlotte Fairall, who lost her daughter Sophie, to a very aggressive form of Rhabdomyosarcoma. Sophie’s story inspired the speech the former Secretary of State gave when he launched the 10 Year Cancer Strategy.

"With that in mind I would really appreciate it if the new Secretary of State could re-state his commitment to that Strategy and also to including a Childhood Cancer Mission at its very heart."

"Firstly, the House recognises the way my Rt Hon Friend has championed this issue. I think there can be few more emotive issues that the one she draws to the attention of the House.

"In keeping with my predecessors I will be very happy to engage with her on this important issue."

This question - as part of Oral Questions to the Health Secretary - comes after former Health Minister, Caroline, secured a debate on Childhood Cancer Outcomes in April. Cancer is the biggest cause of death among children and yet, incredibly, this was the first time this vitally important topic was the subject of a full debate in the House of Commons chamber.

Caroline and Charlotte Fairhall have previously met with both the former Secretary of State for Health, Sajid Javid and Minister Maria Caulfield MP, to discuss this vital issue and share Sophie’s story.

Speaking after the debate Caroline said:

Sophie Fairhall created a bucket list with the aim of improving the experiences of children and their families who find themselves in a similar position to herself. Sophie’s mother, Charlotte, has been determined to continue this remarkable work in her memory and Caroline, who was Care Minister at the Department of Health and Social Care from 2018-2020, has pledged her support.