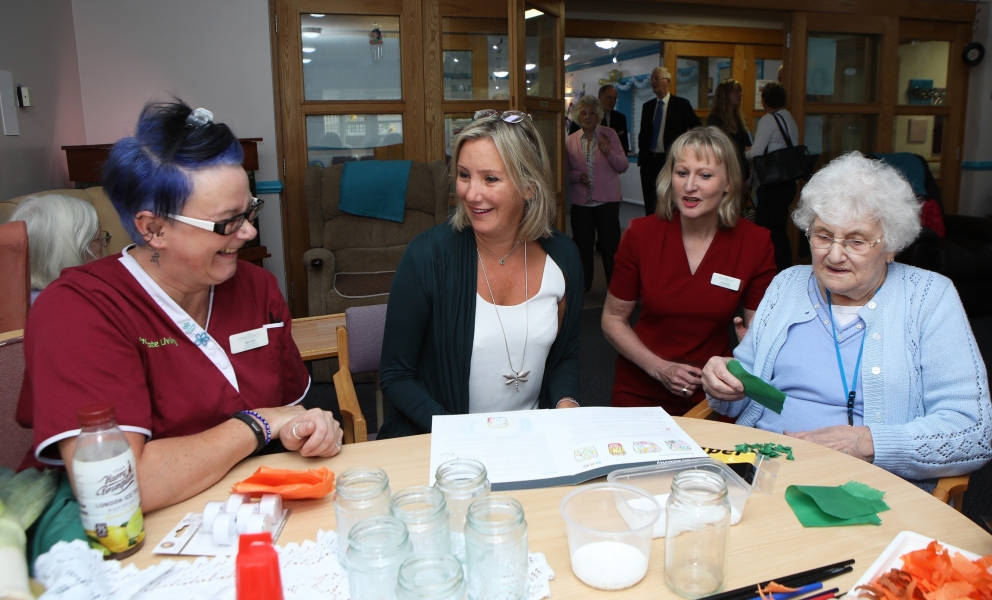 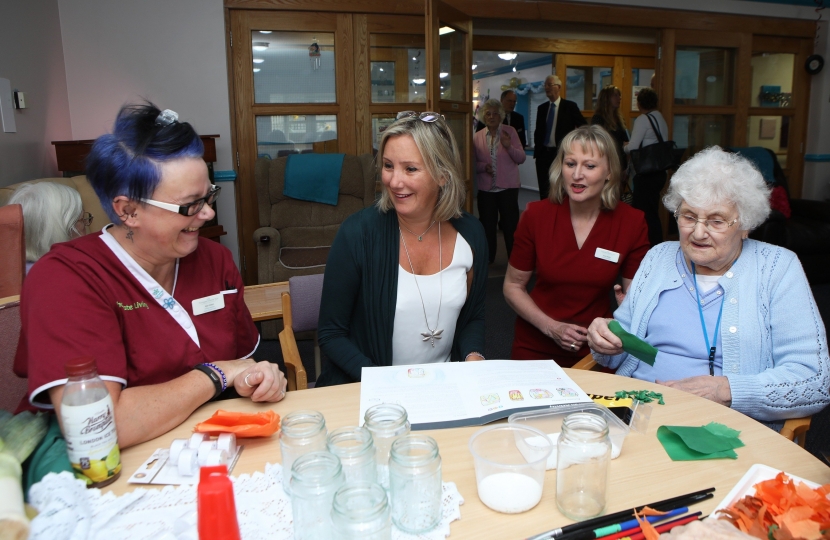 Caroline is passionate about protecting local health and care resources, and fought successfully to secure the reopening of Blake Maternity Unit at the Gosport War Memorial Hospital in early 2011. She has since supported the Children's Heart Unit at Southampton Hospital, met the local Clinical Commissioning Group, visited the War Memorial Hospital, Queen Alexandra Hospital and local GPs and other healthcare providers.

Since being elected Caroline has continued to support the families of those who died at the Gosport War Memorial Hospital between 1988-2000 to access the truth of what happened to their loved ones. In June 2018, the Gosport Independent Panel published their report into these deaths. The Department of Health & Social Care have put in place a support package for those affected by events at the Gosport War Memorial – call 01132545290 or e-mail gosportenquiries@dhsc.gov.uk.

Gosport was chosen by the Department of Health to be part of their Vanguard project to improve community care and Caroline has frequently met with the project leaders, to be updated on the progress of the project. This project has delivered the Same Day GP Access Service at Gosport War Memorial Hospital where a Multi-speciality Community Provider hub has been established, integrating different healthcare specialists into one centralised location.

She regularly meets with staff and management at the Queen Alexandra Hospital to raise constituents concerns and keep updated with developments at the site. Since 2017, a Care Quality Commission inspection report for the Hospital, rated it as Requires Improvement (even though the standard of care was rated as outstanding). QA have published their strategy for the next five years entitled 'Working Together' which can be found here.

After a discussion with the Chief Executive of Queen Alexandra Hospital in early 2018 about the state of the A&E facilities, Caroline suggested that they bid for the STP Capital Scheme and subsequently the hospital put forward a proposal for redevelopment of their emergency floor. Caroline lobbied the Minister of State for Health to highlight the importance of this £58.2 million bid which was successful and will secure a long-term solution to this overstretched service, improving patient safety. Caroline welcomed the news in March 2022 that the brand-new Emergency Department at Queen Alexandra Hospital has received full planning permission by Portsmouth City Council following £58.3m of Government investment - which she helped to secure. A new Emergency Department will improve facilities, capacity & overall patient care – significantly helping ambulance waiting times and making a real difference to our region.

A number of concerns regarding Southern Health NHS Foundation Trust have been highlighted by the Care Quality Commission over the years and Caroline attends regular meetings as well as receiving updates both from Southern Health and the Care Quality Commission. She has met with the leadership team and is keen to hold them to account for their failures and make sure that past mistakes will not be repeated.

Caroline is regularly contacted by constituents with concerns regarding GP Access. She has met with the Willow Group, the Fareham and Gosport Clinical Commissioning Group and Southern Health NHS Trust to discuss these problems and to hear what steps they are taking so that patients can access Primary Care efficiently. She has also met with partners at Stubbington Surgery to help find a solution to the cramped conditions at their practice.

In May 2019, Caroline hosted a Health Forum with representatives from eight local healthcare organisations. This forum gave Gosport constituents a unique opportunity to hear the latest updates and air their views on everything from dentistry to emergency care and ambulances to smoking cessation services.

Caroline has visited a number of nursing homes within the constituency to meet residents, staff and owners and participates in the annual National Care Home Open Day.

The Government’s continued investment into mental health, including in schools, is welcomed by Caroline. In 2018, it was announced that Mental Health services will receive an additional £2.3 billion per year as part of the NHS five-year funding offer, including dedicated mental health teams in schools.

Caroline has campaigned to bring greater fairness to the IVF guidelines implemented by the local Clinical Commissioning Group which means that couples in the Gosport and Fareham area cannot access the levels of IVF treatment they would be entitled to in other parts of the UK.

With the launch of British Heart Foundation's Public Access Defibrillators scheme in 2015, Caroline called on local groups to take advantage of the defibrillator kits and CPR training on offer. As a result, life-saving equipment has been installed at a number of locations across the constituency.

Caroline has actively raised awareness on behalf of diabetes and cancer charities both locally and nationally in recognition of their valuable work to tackle these dreadful diseases and support those affected. She joined in the WearAHatDay event with children from Alverstoke Infant School to help raise the profile of the Brain Tumour Research charity.

In May 2014, Caroline abseiled down the Spinnaker Tower and in 2012 undertook a parachute jump to raise funds for the Gosport & Fareham branch of the MS Society.

In January 2018, Caroline was appointed Minister of State at the Department of Health & Social Care. In this role, Caroline announced that over 100 NHS hospitals will be able to build Changing Places facilities backed by a £2 million Government fund. Caroline is pleased that across the Gosport constituency a number of Changing Places Facilities have been installed or are planned.

Caroline was successful in securing a debate on Childhood Cancer Outcomes in the House of Commons in April 2022. The debate was inspired by Caroline’s 10 year old constituent, Sophie Fairall, who passed away in September following a year-long battle with a rare & aggressive cancer. Sophie created a bucket list with the aim of improving the experiences of children and their families who find themselves in a similar position to herself. Sophie’s mum, Charlotte, and Caroline are determined to continue this remarkable work in her memory.

Caroline spoke in favour of a Government amendment to the Health and Social Care Bill which will ensure that carers are consulted when a patient they care for is discharged from hospital. This places a new duty on NHS hospital trusts in England to ensure that unpaid carers are involved as soon as feasible when plans for the patient’s discharge are being made. The amendment covers all carers of adults needing care and support following hospital discharge, including health care support. This means that young carers looking after adults would also be covered.

In addition to this Caroline often highlights health and social care issues in the Chamber, through OPQ's, interventions and speaking in debates. Recently, Caroline asked Government ministers when the promised unpaid leave for carers is likely to be delivered.

In the Queen’s Speech debate today, Caroline pressed Paul Scully MP, Minister for Small Business, Consumers and Labour Markets at the Department for Business, Energy and Industrial Strategy, on when the Government will deliver the promised employment leave for informal Carers.

The week, which is hosted by the Mental Health Foundation, is in its 22nd year and runs from 9-15 May.

This week Caroline pitched to the Backbench Business Committee for a debate on Childhood Cancer Outcomes.

Local MP, Dame Caroline Dinenage, has welcomed the Health and Social Care Secretary Sajid Javid declaration of a “war on cancer” and launch a call for evidence to underpin an ambitious 10-Year Cancer Plan for England.

Local MP, Caroline Dinenage, today pushed the Prime Minister to advocate for more training for GPs to spot the signs and symptoms of Childhood Cancer.

Prime Minister confirms England must move to Plan B

The Prime Minister has today announced that England must move into Plan B to slow the spread of Covid-19.

Caroline urges people to get their booster jab on ‘Boost Day’

Local MP, Caroline Dinenage, marked ‘Boost Day’ – the one year anniversary of the UK becoming the first country in the world to approve Pfizer’s Covid vaccine – by urging people in Gosport, Lee on the Solent, Stubbington and Hill Head to get their booster jab when they are called forward.