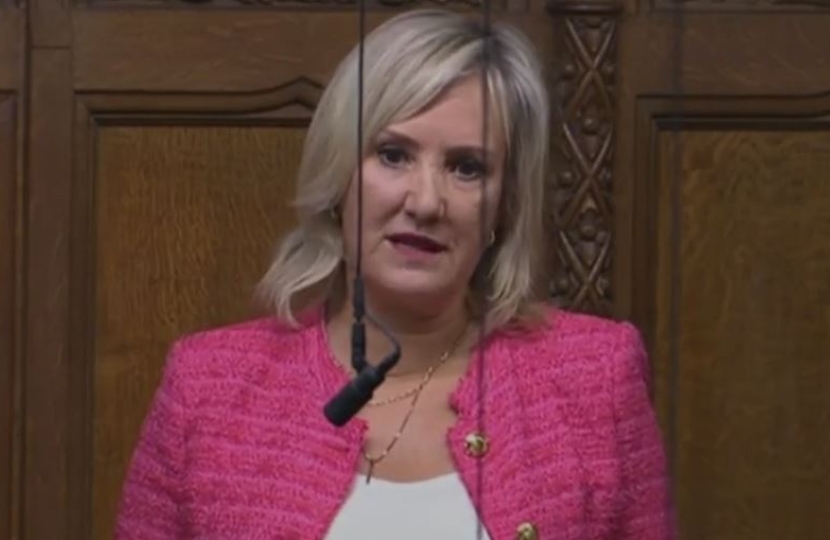 Local MP, Caroline Dinenage, today pushed the Prime Minister to advocate for more training for GPs to spot the signs and symptoms of Childhood Cancer.

The Prime Minster’s Question was inspired by Caroline’s 10 year old constituent, Sophie Fairall, who passed away in September following a year-long battle with a rare & aggressive cancer.

Sophie created a bucket list with the aim of improving the experiences of children and their families who find themselves in a similar position to herself. Sophie’s mum, Charlotte, and Caroline are determined to continue this remarkable work in her memory.

Speaking in the House of Commons, Caroline asked the Prime Minister:

“Sophie Fairall was just 10 years old when she died in September.

Childhood cancer is often described as ‘rare’ yet Cancer is the biggest killer in children under 14.

Sophie’s GP failed to diagnose her cancer. It was only when they went to A&E that they discovered the tumour in her little body that was 12 cm long. On World Cancer Day on Friday, I would like to ask the Prime Minister to please advocate for more and better training for General Practice to identify cancer in children?”

“I’m very sorry to hear of Sophie’s case and my thoughts are with her, her family and her friends.

She is right that research is crucial in tackling childhood cancers that’s why we’re investing in more research, but it is also vital that we do tests, scans and diagnostic screenings early enough.

That’s why it’s also important that NICE has not only updated it’s guidance on childhood Cancers in February 2021 but we are investing in 100 new diagnostic centres in community hubs.”

“It was an honour to raise Sophie’s story in the House today. Her story is heart-breaking and has unveiled many improvements needed in the way we detect, treat and care for children with cancer.

I have pledged to do all I can to support Charlotte and push for the changes we want to see. I’m hoping to lead a debate in Parliament on these issues soon.”

“Much more needs to be done for childhood cancer, including more awareness of the signs and symptoms for the general public and health professionals. More children are diagnosed through A&E than by referral and childhood cancer isn’t as rare as we think with 1 in 450 children diagnosed with cancer each year in the UK.

GPs and nurses need to be considering cancer as a possibility when treating children or young people alongside more investment into research as childhood cancer is the number one killer of children by disease in the UK. Children like Sophie need to be given a voice and changes made. They deserve so much more.”