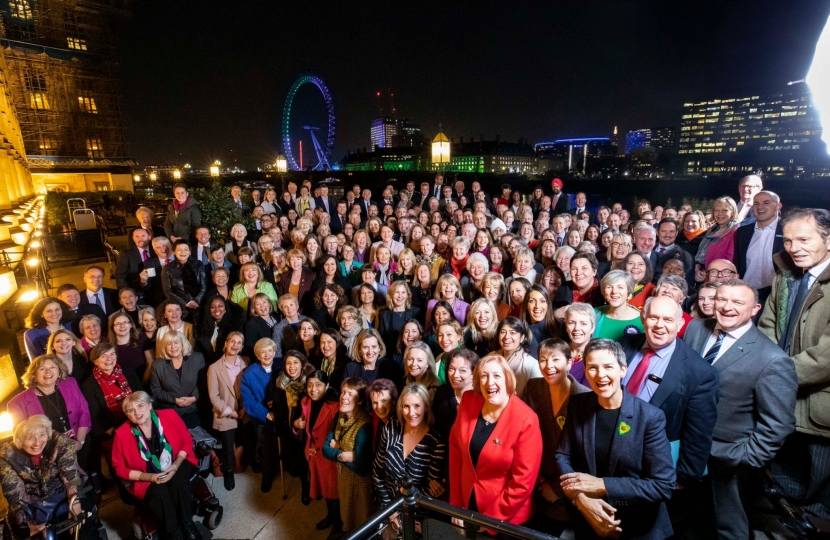 Caroline has always been a committed champion of women's equality. In particular, she has strived to inspire more women and girls to become business and career women and keenly encourages girls to take up STEM subjects in school. She hosted an event at Bridgemary School, designed to inspire and encourage schoolgirls to become Enterprising Women. In 2013 she stood up in the House of Commons to celebrate the success of the so-called 'Mumpreneurs' who work from home and contribute approximately £7 billion a year to the economy.

Caroline believes we must do all we can to ensure the  Rbarbaric practice of Female Genital Mutilation becomes a thing of the past. She was pleased that Lord Berkeley's Bill, which offers greater protection to children at risk of Female Genital Mutilation was passed. She also welcomes the new offence of failure to protect a girl from FGM, alongside a specialist nationwide outreach and the £3 million national Prevention Programme and new FGM Protection Orders.

Caroline is fully committed to advancing the cause of LGBT equality and supports the law on same sex marriage. The UK is a world leader for transgender rights and Caroline welcomes the progress made so far, guidance has been issued to employers and service providers, a £3 million programme is tackling transphobic bullying head on and the first ever action plan with over 75 commitments for improving the lives of lesbian, gay, bisexual and transgender people has been published. However, Caroline recognised that more must be done to help transgender people with the unique and often difficult challenges that they face and is encouraged that new measures have been announced to deliver greater equality to the LGBT community.

A quarter of a million people require Changing Places toilets so it is important to ensure these essential facilities are accessible to everyone. As Minister of State for Care, Caroline announced that over 100 NHS hospitals will be able to build Changing Places facilities backed by a £2 million Government fund as well as a consultation on proposals to include these essential facilities in all new large publicly-accessible buildings and significant redevelopments. Caroline is pleased that across the Gosport Constituency a number of Changing Places Facilities have been installed or are planned.

Disabled people make up a fifth of the working age population, yet only 51.3% of people with disabilities were in employment. Caroline hosted a Disability Confident Event to give local businesses an understanding of the benefits of employing disabled jobseekers and the support available to them to do so. She is also encouraging more local businesses to sign up to the scheme to more Disability Confident across the Gosport constituency.

In April 2014, Caroline was appointed Parliamentary Private Secretary to the Rt Hon Nicky Morgan MP, who was Minister for Women and Equalities at the time. This enabled Caroline to play an important role in championing women's equality in the run up to the 2015 General Election.

From May 2015 to July 2017 Caroline was Minister for Women and Equalities. In this role, she championed the work to get more women on boards, promoted flexible working & shared parental leave and implemented the gender pay gap reporting regulations which came into force in April 2017.

Caroline is currently a member of the Women and Equalities Committee which examines the work of the Government Equalities Office (GEO). It holds Government to account on equality law and policy, including the Equality Act 2010 and cross Government activity on equalities. It also scrutinises the Equality and Human Rights Commission. Within this role, Caroline has had important discussions on: Menopause and the workplace; Equality and the UK asylum process; Black maternal health; and Preventing violence against women and girls to name but a few.

Caroline has also called for the Government to provide further support for women in enterprise who have been disproportionately affected by the coronavirus pandemic. Caroline has long campaigned for measures to inspire female entrepreneurs and support women in business, having run her own business for 20 years prior to becoming an MP. During her role as Minister of Women and Equalities 2015-2017 Caroline championed getting more women on boards and introduced legislation on Gender Pay Gap reporting. She also hosted an event for International Women’s Day 202, aimed at encouraging more women to get start and grow their own businesses.

Women urged to speak out!

Women in the Solent region are being encouraged to share their experiences, as well as their priorities, to help shape the first ever government-led Women’s Health Strategy, designed to increase the health and wellbeing outcomes of women in England.

Gosport MP, Caroline Dinenage, has announced that next month she will host a drive for budding local entrepreneurs.

I have received many emails about ‘Black Lives Matter’ and the protests in the United States and across the world.

75 projects across the country will be given a share of £16.6 million funding to support victims of domestic abuse. The funding has been announced by the Housing Secretary, Robert Jenrick, who has committed to ensuring victims have access to the support they need from local councils.

75 projects across the country will be given a share of £16.6 million funding to support victims of domestic abuse. The funding has been announced by the Housing Secretary, Robert Jenrick, who has committed to ensuring victims have access to the support they need from local councils.

The Government has announced plans to introduce a statutory duty on local authorities to provide services for victims and survivors of domestic abuse.