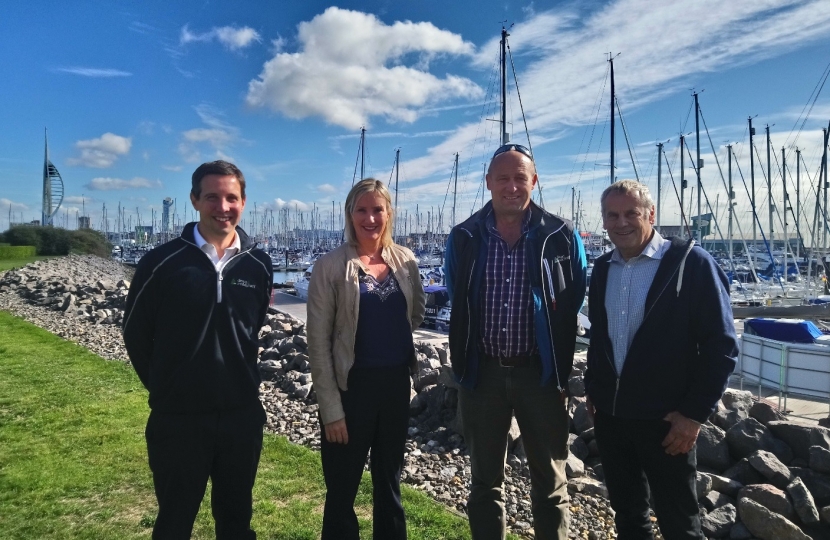 She has taken part in the influential Marine Sector Advisory Group and was instrumental in the formation of Gosport Marine Scene, which seeks to highlight Gosport's status as a world class destination for sailing and yachting. In 2019 this was expanded to Portsmouth Harbour Marine Scene to encompass the wider area.

Caroline welcomed Sir Ben Ainslie's £90m Americas Cup Race Team HQ to the area and sees the plans for a multi-million pound investment into Haslar Marina as key to creating a centre of excellence in our region.

Caroline has met with successive Transport Ministers to make the case for necessary improvements to legislation governing the use of Personal Water Craft (PWC), such as jet skis and RIBs. Existing legislation fails to protect the users of PWCs and other water users, as was clearly demonstrated by the death of Gosport’s Ryan McKinlay.

Caroline believes, that is vital that our marine habitats are protected and she is delighted that there will be 41 new Marine Conservation Zones across the UK, safeguarding almost 12,000 square kilometres of marine habitats. Our local seas also fall under Marine Protection Areas.

As an MP for a coastal constituency Caroline sees for herself on a daily basis the devastating impact of plastics in our oceans and on our beaches that is why she has taken part in two #GiveUpPlasticForLent pledges and supported the ‘Plastic-Free Parliament’ campaign.

She is a keen supporter of local groups who carry out beach cleans, such as Surfers Against Sewage and can regularly be seen supporting the events. Caroline has also organised a beach clean with the Marine Conservation Society.

Caroline also supported the world’s most comprehensive ban on microbeads to tackle the large number of plastics choking our marine life.

The Gosport Sea Wall is the vital barrier which helps protect the integrity of Portsmouth Harbour. Portsmouth Naval Base, the Commercial Port and hundreds of homes and businesses which surround the harbour depend upon it being kept in good condition. In January 2022 Caroline arranged a multi agency meeting to ensure there is a strong plan in place to see the wall is properly maintained.

Local MP, Caroline Dinenage, has arranged a public meeting with Southern Water for constituents to discuss local concerns about water quality and other issues.

Local MP, Caroline Dinenage, welcomes new measures to enhance wildlife, transform our waste system and improve the resilience of water supplies which have been set out today by Environment Secretary Michael Gove.

On Saturday, Secretary of State for Environment, Michael Gove announced the Government’s next steps in protecting our precious marine environment across England. A review will be launched to examine if stronger protections could be introduced to better protect sensitive sea life.

"100,000 marine mammals and turtles and 1 million sea birds are killed by marine plastic pollution annually: this shocking statistic has inspired me to pledge to #PledgeOnPlastic” once again Caroline Dinenage MP

Gosport MP Encourages Constituents To Have Their Say On Plastic Waste

“Reducing plastic waste is something that I have, and will continue to campaign for.