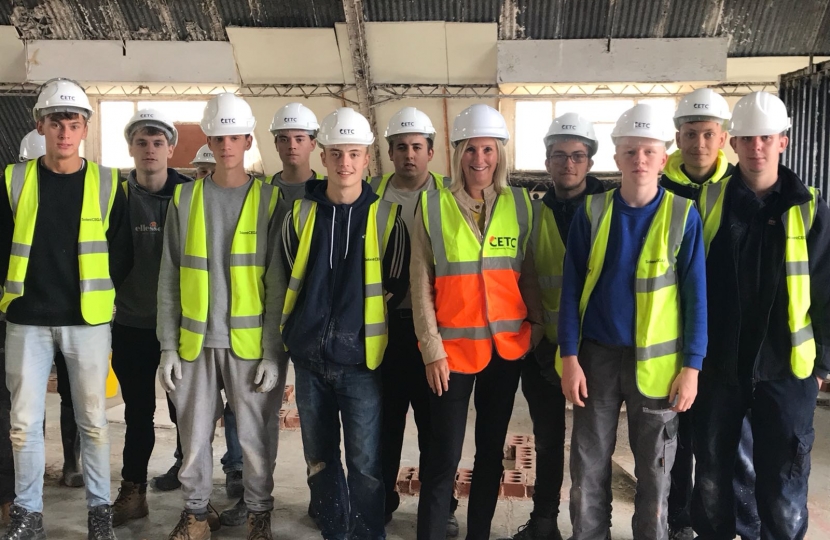 In  October 2010, Caroline organised and chaired a mini summit with all the key stakeholders which formed the Daedalus Strategy Group. She continued to chair the group until October 2015. It was instrumental in Daedalus’ successful bid to become an Enterprise Zone and successive funding bids which have seen over £50 million invested in the site by various bodies.

She continues to work closely with the Solent Local Enterprise Partnership, Homes England and other stakeholders and has welcomed a number of key Government Ministers to the site. The Solent Enterprise Zone has created and/or safeguarded around 950 full time and construction jobs at Daedalus.

Caroline is a keen supporter of apprenticeship schemes and even completed her own mini-apprenticeship as a barista at Costa Coffee on Gosport High Street. She also ran a campaign to shine a light on the diversity of apprenticeships in the Gosport Constituency, which culminated in the learners being invited to Parliament and greeted by the then Apprenticeships and Skills Minister, the Rt Hon Robert Halfon MP.

In the early weeks as an MP, Caroline successfully campaigned against the Defence Training Review which would have seen the Royal Navy School of Engineering at HMS Sultan moved to South Wales. However, in November 2016, the Defence Estate Review announced that HMS Sultan would be disposed of by 2026. Caroline urged the Government to reconsider its decision and in February 2019 it was announced that the closure of HMS Sultan would be indefinitely delayed. Caroline will continue to lobby the Government to ensure that HMS Sultan remains open.

Caroline has frequently met with the owners of the Haslar Hospital estate and lobbied them to secure a positive future and local jobs on this much loved site, which was sold off by the previous Labour Government. She hopes that the widely stated plans for the site will come to fruition.

Certainty For Gosport Constituents As Furlough Scheme Is Extended To March

Gosport MP, Caroline Dinenage, has commended the Chancellor, Rishi Sunak, on the decision to extend the Coronavirus Job Retention Scheme (CJRS) – commonly known as the furlough scheme – until the end of March 2021.

Gosport MP, Caroline Dinenage, has joined over 100 MP’s and Peer’s across the UK to mark National Mentoring Week 2020, taking part in the Diana Award’s ‘One Hour, One Young Person, One Parliamentarian’ mentoring campaign.

Local MP, Caroline Dinenage, is hosting two free Online Digital Skills Workshops, one for businesses looking to set up and grow their digital retail business on eBay and one for existing eBay users.

Today, the Chancellor, Rishi Sunak, has launched the new Job Entry Targeted Support scheme (JETS) to help those who have lost their job due to the pandemic get back into the workplace.

The government has launched the Kickstart Scheme, an innovative new proposal to help young people into work and facilitate Britain’s economic revival.