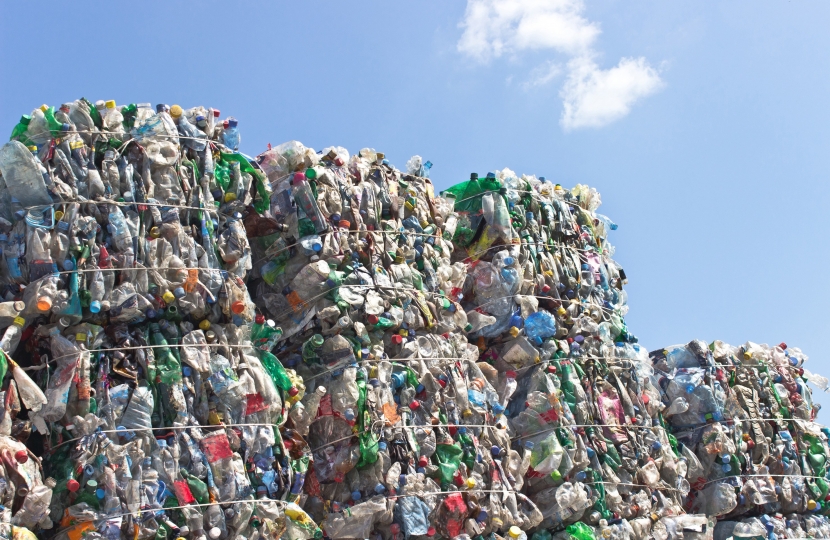 To raise awareness, Caroline has taken part in two #GiveUpPlasticForLent pledges and supported the ‘Plastic-Free Parliament’ campaign where she learnt about the reliance of single-use plastic but also the small changes an individual can make which can make a big difference.

Caroline, along with the then Environment Minister, Thérèse Coffey, launched a new recycling initiative for paper coffee cups in Gosport in January 2018 – the first of its kind in the UK. Created through a partnership between Gosport Borough Council and paper cup manufacturer Huhtamaki, the scheme is piloting a collection and recycling service for used coffee cups for residents and businesses.

She is a keen supporter of local groups who carry out beach cleans and litter picks, such as Surfers Against Sewage and the Gosport Wombles, and can regularly be seen supporting these events. Caroline has also organised a beach clean with the Marine Conservation Society. Caroline welcomed the world’s first ban on microbeads which is another step to tackle the large number of plastics which are choking marine life.

Caroline wholeheartedly supports the Plastic Waste Plan, a strategy for a cleaner, greener Britain by eliminating all avoidable plastic waste within the next twenty five years. She strongly welcomed the proposal for a bottle-deposit scheme and fully backs the 5p plastic-bag charge which has reduced use by over 9 billion bags! Alongside this plan, an ambitious new Resources and Waste Strategy has also been announced which will overhaul England's waste system.

Caroline fully understands how litter blights our towns and roadsides and spoils our enjoyment of the countryside and to tackle the blight of litter, so she is pleased that a new National Litter Strategy has come into force.

Caroline welcomes the positive movement towards renewable energy. In particular, the Government’s British Energy Security Strategy sets out how Great Britain will accelerate the deployment of wind, new nuclear, solar and hydrogen, whilst supporting the production of domestic oil and gas in the nearer term – which could see 95% of electricity by 2030 being low carbon.

The strategy will see significantly more nuclear energy, with an ambition of up to 24GW by 2050 to come from this safe, clean, and reliable source of power. This would represent up to around 25% of our projected electricity demand. Subject to technology readiness from industry, Small Modular Reactors will form a key part of the nuclear project pipeline.

Despite significant improvements in air quality over recent decades, air pollution continues to have an impact on people's health so Caroline is pleased that the Government is committed to tackling this problem with the Road to Zero strategy, which sets out the Government's ambition of being a world leader in zero emission vehicle technology.

Caroline supports the UK plan for Tackling Roadside Nitrogen Dioxide Concentrations, which sets out how compliance can be achieved in the shortest possible time and is supported by a £3.5 billion investment into air quality and cleaner transport.

In March 2022 Caroline organised and hosted a public meeting with Southern Water and the Environment Agency where they discussed the work they are doing to improve our water quality and constituents had the opportunity to ask questions of both organisations.

Local MP, Caroline Dinenage, visited Halfords in Gosport where residents have the opportunity to trial an e-bike for free for up to six hours.

Local MP, Caroline Dinenage, has arranged a public meeting with Southern Water for constituents to discuss local concerns about water quality and other issues.

For Earth Day this Thursday, Gosport MP, Caroline Dinenage, has pledged to join the People for the Ethical Treatment of Animals (PETA) Campaign to eat vegan.

This week, Business and Energy Secretary, Kwasi Kwarteng, has published a new blueprint that aims to create the world’s first low-carbon industrial sector and provide £1 billion to schools, hospitals and public buildings to cut emissions.

Today, the Prime Minister has announced a new 10 Point Plan to ensure the country builds back greener following the pandemic and tackles one of the most pressing issues of our lifetime – climate change.

Homes To Be Powered By Offshore Wind In A Decade

Gosport MP, Caroline Dinenage, has welcomed the new aim announced by the Prime Minister at the Conservative Party Conference that all homes will be powered by offshore wind by 2030.

Gosport MP, Caroline Dinenage, has welcomed the announcement that a new, first of its kind, £3.9 million project will go towards protecting the Solent’s wildlife and habitats.

Gosport MP, Caroline Dinenage, has commended the decision to increase the plastic bag charge to 10p and extend it to all retailers in April 2021.

Local MP, Caroline Dinenage, has welcomed the news that the Environment Bill will have legally binding targets that will focus on improving air quality, water, waste and biodiversity.