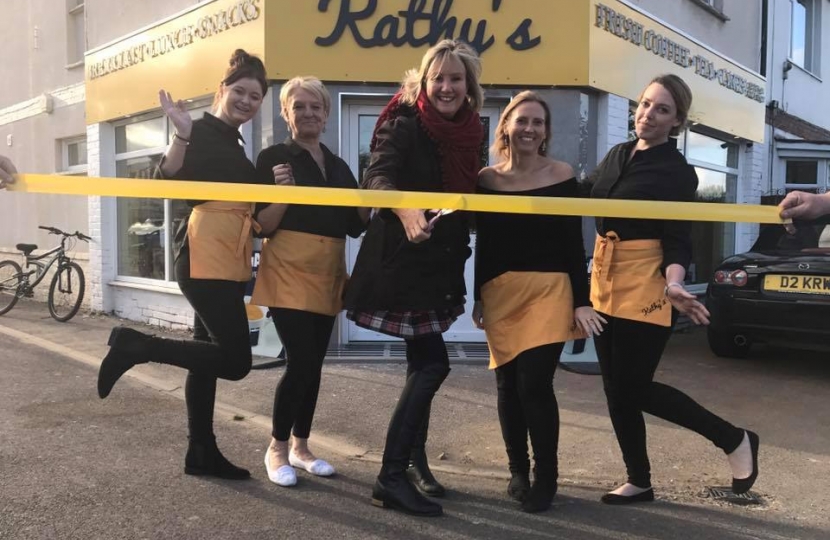 Caroline has extensive experience with small and medium sized enterprises, both as a business owner for 20 years and from her role in Parliament. She was a member of the Business, Innovation and Skills (BIS) Select Committee from 2012 to 2015 and Vice Chair of the Parliamentary Group for Manufacturing. In 2013, Caroline was appointed Small Business Ambassador for the South by the then Prime Minister, David Cameron.

Locally, with 0.51 of a job per working adult in the Gosport peninsula, Caroline has made economic regeneration an absolute priority.

As such, Caroline set up the Gosport Taskforce in 2016, where they discuss the disposal of military sites such as HMS Sultan and Fort Blockhouse. She has also been working alongside Berkeley Homes and the Royal Clarence Marina Residents Association to encourage business growth in Royal Clarence Yard and met with the MOD to ensure its suitable disposal.

In addition to her work to bring an Enterprise Zone to the disused military airfield at Daedalus, she's been part of a number of successful Regional Growth Fund bids across the area including the 'Bridging the Gap' fund for small and medium businesses which secured over £4 million for local businesses.

More generally across Gosport, Hill Head, Stubbington and Lee-on-the-Solent, Caroline has campaigned for the regeneration of Waterfront having met with the British Retail Consortium, backed the Council's submission to the Portas Review, and helped secure £100,000 of funding from the Government. She also backed their bid to the £675 million Future High Streets Fund which aims to transform high streets and town centres.

With the fantastic location of the Gosport Peninsula, Caroline is keen to further develop this location a world-class yacht destination. In 2011 she was instrumental in the formation of the Gosport Marine Scene, bringing local businesses & organisations together to promote the area as a major marine and sailing destination on the south coast. This was expanded to include the wider Portsmouth Harbour area in 2019 and you can find out more about them here .

This continued growth is supported by Caroline's close work with the Solent Local Enterprise Partnership (LEP) since its establishment in 2011 - aiming to develop sustainable economic growth and private investment in the Solent. She is keen to ensure that Gosport, Stubbington, Hill Head and Lee-on-the-Solent are at the forefront of regeneration plans and consistently asks for updates on their progress and future plans. The Solent LEP have recently published the 'Gosport Infrastructure Investment Plan' which can be found here .

Caroline regularly meets with local employers – from major companies such as BAE to micro-businesses and has been a keen advocate of apprenticeships, supporting schemes at the CEMAST Centre, the Civil Engineering Training Centre and Huhtamaki, among others and is a supporter of Small Business Saturday.

Across the constituency, she has hosted various events for local entrepreneurs and businesses, including a Disability Confident conference, and hosts an annual Enterprise Fair during Enterprise Week. Caroline has also organised many events for senior school pupils and surrounding business. She welcomed Baroness Karren Brady for an 'Apprentice' inspired business & entrepreneurship workshop at Bay House School and another at Bridgemary School which welcomed Jacqueline Gold CBE and a cohort of successful local businesswomen from the local area for an Enterprising Women event.

A study by GMB Southern found that full-time workers’ mean gross annual pay in 2018 was 86.4% of what it was in 2007, however Gosport was one of only two areas who saw an earnings increase, standing at 110.9% of the figure in 2007. Caroline welcomed these findings, which shows the positive benefits of her actions to regenerate the Gosport economy.

Over 6,800 grants have been distributed to local businesses across Gosport and Fareham who have benefitted from a share of over £42 million since the beginning of the pandemic.

Caroline Connects With Local Leaders About Levelling Up

Gosport MP, Caroline Dinenage, has today met with representatives from Gosport Borough Council, Hampshire County Council and the Solent LEP to discuss potential projects to bring real benefits to the Gosport Constituency through the new Levelling Up Fund.

Gosport MP, Caroline Dinenage, has commended a new £56 million Welcome Back Fund for local councils announced over the weekend.

Gosport MP, Caroline Dinenage, has welcomed a Budget to help the Gosport Constituency build back better following the COVID-19 pandemic.

Local MP, Caroline Dinenage, is leading a local drive to bring free government support to more firms in Gosport - helping them take advantage of export opportunities and tap into demand for British products from overseas.