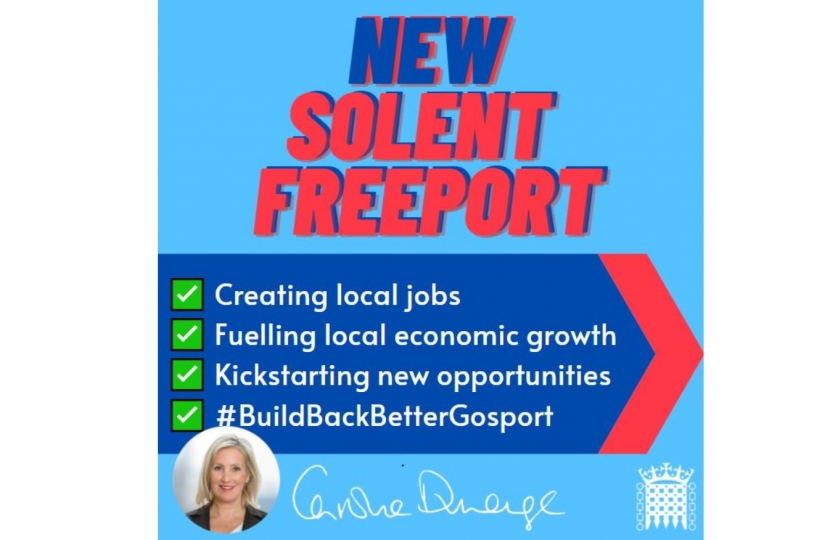 The news has been welcomed by Gosport MP, Caroline Dinenage, who wrote to the then Trade Secretary back in 2019 to discuss the opportunities that freeports can bring. Since, she has supported the bid by Portsmouth Port and met with the Solent LEP to talk about proposals.

Freeports are areas, usually around airports or ports, that are a tariff free zone for businesses. This includes a reduction in tax that is paid on existing property and when the business buy new buildings. In addition, employers benefit from a reduction in national insurance costs for new employees.

The Solent Freeport is estimated to generate £2 billion in gross value added and create 26,000 local jobs and 52,000 jobs nationally.

The Chancellor today commented that they have "different rules to make it easier and cheaper to do business" and are expected to generate and encourage economic growth.

“I am delighted that Portsmouth Port will be part of the new Solent Freeport following the bid from the Solent LEP and support from local Members of Parliament.

“Just part of the Budget’s measures to help the Gosport Constituency build back better following the pandemic.”

"Our combined efforts across the region have shown the power of the Solent as a Freeport. We are pleased that our aim to create a Freeport that focuses on green ambitions has been recognised. Now we have been selected, we can work with our partners on developing our plans further.