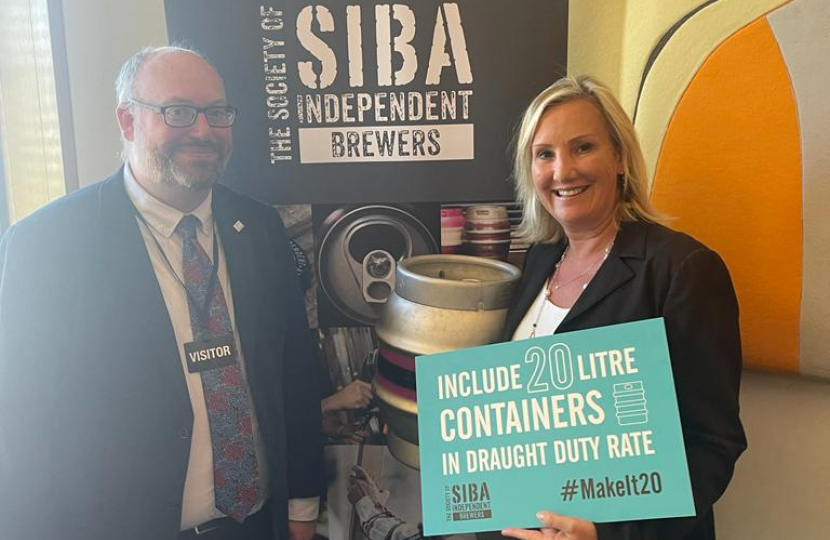 Local MP, Dame Caroline Dinenage, has thrown her weight behind a campaign to support independent brewers and community pubs in Gosport.

Caroline supported a Parliamentary event last week calling for the new draught beer duty rate to be extended to include smaller casks and kegs – containers more likely to be used by small independent breweries.

As Caroline has a number of microbreweries in her constituency of Gosport, she previously wrote directly to the Treasury highlighting this extremely important issue.

The event was organised by the Society of Independent Brewers (SIBA), and enabled Members of Parliament to engage with the views of local brewers and industry specialists to discuss new plans for the way that the government taxes beer.

At the Budget last year the Chancellor announced that beer sold in pubs would pay 5% less beer duty next year but this only applied to larger containers over 40 litres in size. Independent brewers and community pubs often use smaller 20 and 30 litre casks and kegs and are concerned they will lose out.

To ensure that independent brewers and community pubs don’t miss out on the benefits of this new beer duty system Caroline has pledged to support SIBA’s ‘make it 20’ campaign, to include smaller containers in the design of the new beer duty.

“Our independent brewers produce some of the best beer in the world and I’m proud of the contribution that independent brewers and community pubs in Gosport make to our local economy. Gosport is lucky enough to have a number of fantastic microbreweries including Fallen Acorn Brewing Co., Powder Monkey Brewing Co. and Newtown Brewery, and I want to ensure that they all receive the support they deserve.”

“It’s only right that the new draught duty offers a fair and level playing field for our outstanding independent brewers to compete with bigger brewers. That’s why I’m supporting SIBA’s ‘make it 20’ campaign, and doing all I can in Parliament to stand up for independent beer.”

“I’m grateful to MPs for supporting local independent brewers and giving their backing to the Make It 20 campaign.

“We know that the Chancellor will introduce a lower rate of duty on draught beer and this is really good news for the brewing, pub and wider hospitality sector, but it’s important that he gets the design of this new system right, and applies the new lower rate to 20 and 30 litre casks and kegs. Small breweries should not be put at a disadvantage, so MP support for our make it 20 campaign is hugely appreciated”.