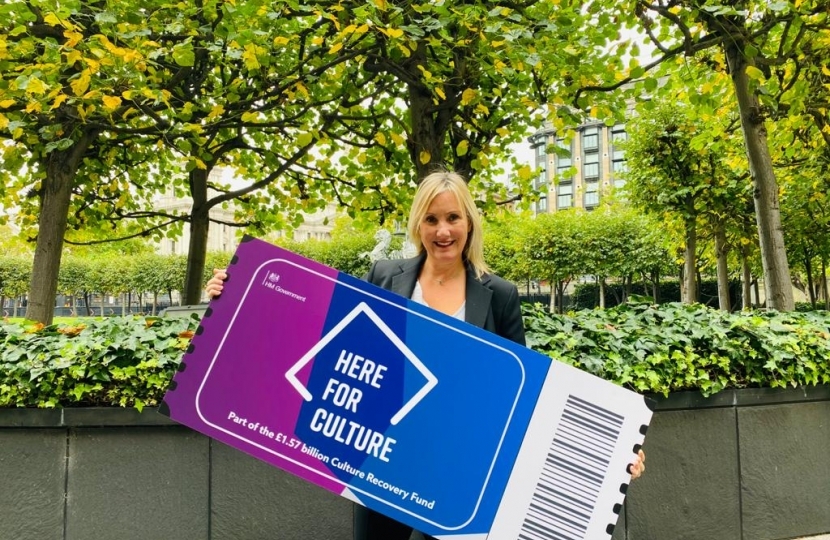 Today, over £1 billion has been provided to support arts and heritages organisations throughout the country through a fund that Gosport MP, Caroline Dinenage, helped to secure.

In her role as Minister for Digital and Culture in the Department of Culture, Media and Sport, Caroline facilitated the creation of the Culture Recovery Fund, a £1.57 billion package to support organisations as they face difficulties caused by the pandemic.

Local organisations have benefitted from distributed funds to help them protect their organisation and staff, including:

In the biggest ever one-off investment in UK culture, over 3000 large and small organisations across England have received funding – 70% outside of London. So far this has protected over 75,000 jobs directly, and many more indirectly through freelancer work and supply chains.

A further round of £400 million has been announced for cultural organisations in England which will help organisations look to the future. Funding, which was held back in previous rounds to allow the Government to respond to the changing public health picture, will be available for organisations who are at imminent risk of collapse before the end of this Financial Year.

“Having visited arts and heritage organisations across the country, I know that this period has been far from easy.

“The Culture Recovery Fund offers a lifeline for those who the pandemic has hit the hardest, ensuring our local cultural cornerstones from Fort Brockhurst to The Kings Theatre are here to stay.”

“This government promised it would be here for culture and today’s announcement is proof we’ve kept our word.

“The £1 billion invested so far through the Culture Recovery Fund has protected tens of thousands of jobs at cultural organisations across the UK, with more support still to come through a second round of applications.

“Our investment has given a huge hand to the ‘crown jewels’ of UK culture as well as the places that define culture in our towns and cities – so that they can continue to inspire future generations.”

Further funding will be available to organisations, with the last round of loan applications to the Cultural Recovery Fund open before Christmas and grants distributed in the New Year. In January, separate applications will be live for financial support to help places reopen.