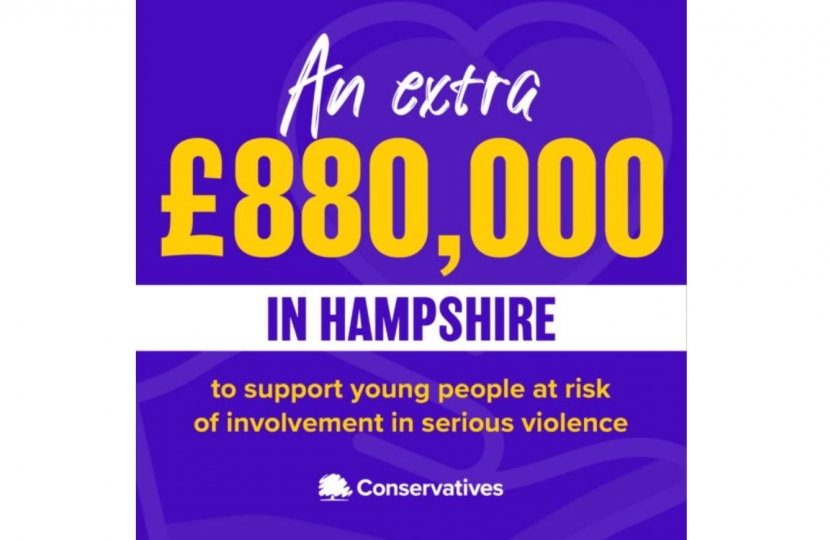 Gosport MP, Caroline Dinenage, has welcomed the news that the Hampshire Constabulary will receive £880,000 extra in funding for its Violence Reduction Unit.

The Unit will benefit from its share of a £35.5 million cash boost announced for police forces across England and Wales to tackle serious violent crime.

Caroline is regularly contacted about a whole range of crime and policing issues. Back in 2019 she set up her own free Crime and Policing event with Hampshire Constabulary and local organisations for constituents to have their questions answered. Following concerns raised at this event, in 2019 she also formed a partnership between Motiv8, Gosport Borough Council, Hampshire police and residents to tackle anti-social behaviour at Hardway Green. The group continues to address ongoing issues, having most recent met in October 2020.

“Tackling serious violence at its root is vital for our young residents who are at risk of ending up as offenders.

“Preventive work through community organisations provides positive role models and helps guide some of our most vulnerable youngsters.

“I am pleased to see that Hampshire Constabulary will benefit from this cash boost to support and work with those at-risk and tackle violent crime at its root.”

This brings total funding for Violence Reduction Units across the country to £105 million, estimated to have helped over 100,000 young people of which over 51,000 were identified as potentially high-risk of being involved in criminal and violent activity.

In addition this year, Hampshire Constabulary have announced that they have welcomed 220 new recruits and are set to receive £21 million in further funding in 2021/22 through the Safer Streets Fund.

“Violence Reduction Units play a vital role in preventing young people from being dragged into the horrors of serious violence, and this funding will enable them to continue this crucial work.

“I will continue to back our police with the resources and powers they need to cut crime and make your community safer.”