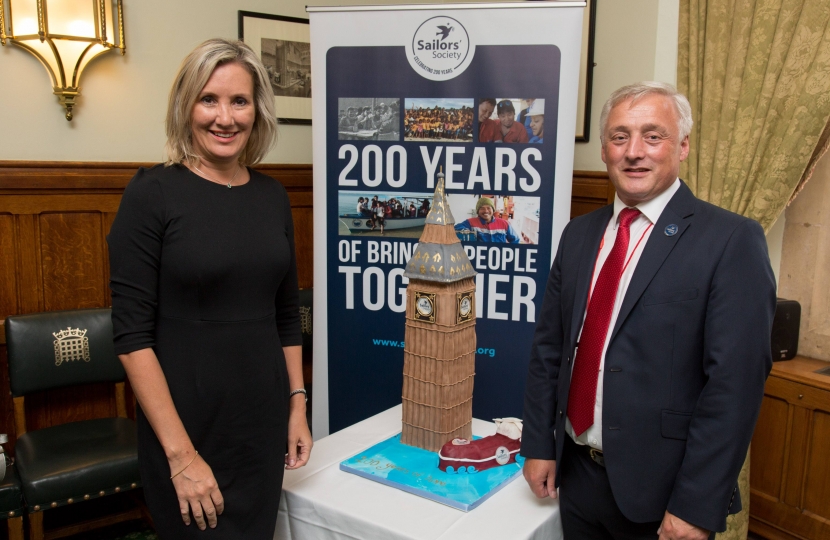 Local MP, Caroline Dinenage, joined international maritime charity Sailors' Society to mark its 200 years of supporting seafarers and their families around the world at a reception held in Parliament yesterday.

"90 per cent of everything we use on a daily basis comes by sea, and the seafarers who transport it often face tough conditions and make great personal sacrifices," said Caroline.

"It was great to hear about the care and support Sailors' Society has provided to seafarers in need over the past 200 years, such as working to help seafarers look after their mental health during the long contracts at sea and supporting their families back at home in times of crisis. Gosport with its historic connection to the sea appreciates the continued support of the Sailor's Society and other maritime charities."

Guests at the event heard also from Kim Spooner, whose aunt and uncle lost their lives in the Herald of Free Enterprise disaster. Kim talked about her family's experience and the support they have received from Sailors' Society over the years.

Sailors' Society was founded on 18 March 1818 to minister to the needs of destitute seafarers returning home from the Napoleonic Wars. The charity now works in 30 countries around the world, supporting seafarers and their families at home, in port and at sea, through the delivery of chaplaincy, education and the relief of poverty and distress.

Stuart Rivers, Sailors' Society CEO, said: "MPs have a long history of supporting the charity's work – very appropriately, our first Chairman was Bernard Shaw MP - and we are grateful to Caroline for helping us celebrate our bicentenary. However, being 200 years old doesn't mean we can sit back on our laurels, and we continue to change and adapt in order to better support the men and women who play such an important role in transporting our goods at sea."