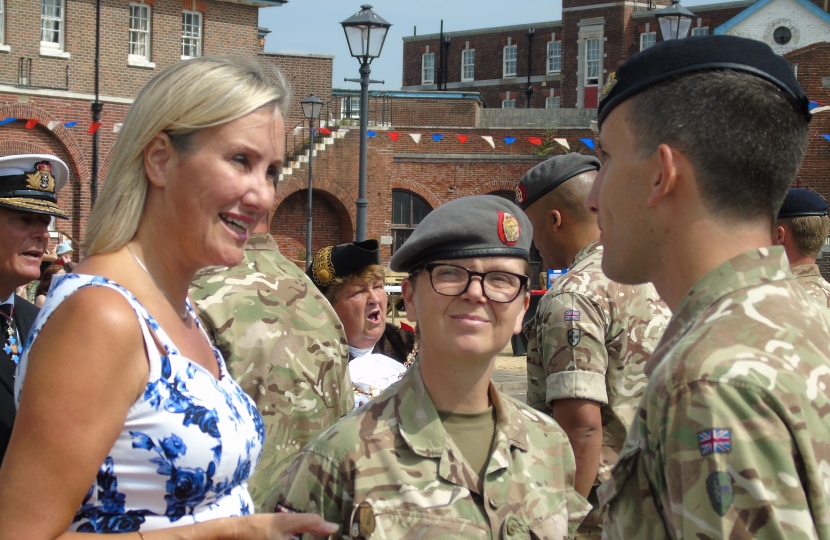 Today Gosport MP, Caroline Dinenage, has welcomed the biggest spending boost since the Cold War – over 30 years ago – for the UK’s defence budget.

Gosport itself has a deep rooted military history, going back to the reign of Charles II and from the 15th century the town and its development has been linked to the growth of the Royal Navy and Portsmouth dockyard. Today, Gosport remains a military town with sites at HMS Sultan and HMS Collingwood still offering cutting edge training to our servicemen and women.

The funding announcement comes at a vital time, when the Army and Ministry of Defence are working harder than ever, from warding off online attackers to assisting the country’s COVID-19 response.

Money will not only be invested in traditional defence capabilities, but also in cutting-edge technology as the country’s adversaries work in sophisticated ways in the world of cyberspace.

Armed forces personnel have also been playing a vital role in the COVID-19 response, with over 20,000 personnel being mobilised to deliver PPE, run testing sites and ensure those in rural areas can access medical care.

But supporting those in need is also a global ambition, as UK Defence supports communities struggling against COVID-19 in the UK’s Overseas Territories and West Africa, as well as providing disaster relief to Central America ravaged by Hurricane Eta and Lebanon following the explosion in Beirut.

Importantly, at a time of economic and employment uncertainty in the UK due to the pandemic, the billions in investment is estimated to create up to 10,000 jobs every year.

“The Gosport Constituency itself has played a pivotal role in our nation’s defence  – from our first fortifications during the reign of Charles II to the fantastic training right now at HMS Sultan & Collingwood.

“As an area with a rich and proud military history, we are well aware of the importance of our defence capabilities and the investment needed to ensure we are always prepared to face new threats in the future.

“I welcome this vital investment, it will protect our country, create local jobs and support our continued efforts against COVID-19.”

The news has been announced by the Prime Minister who said:

“I have taken this decision in the teeth of the pandemic because the defence of the realm must come first.

“The international situation is more perilous and more intensely competitive than at any time since the Cold War and Britain must be true to our history and stand alongside our allies. To achieve this we need to upgrade our capabilities across the board.

“This is our chance to end the era of retreat, transform our Armed Forces, bolster our global influence, unite and level up our country, pioneer new technology and defend our people and way of life.”

This investment confirms that the UK is the largest defence spender in Europe and second largest in NATO, with an overall cash increase of £24.1 billion over four years compared to last year’s budget.