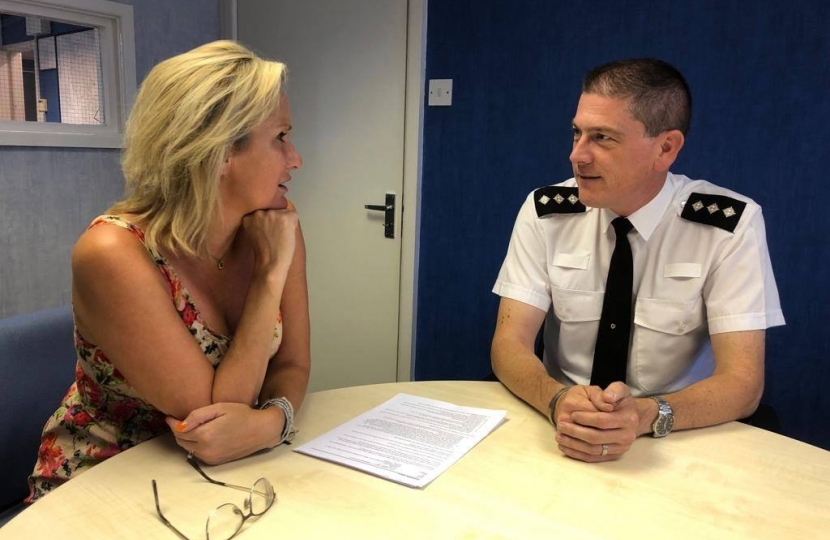 Warm weather over the school holidays has attracted large gatherings of youngsters at points along the waterfront.

The vast majority are well behaved but a number of residents, in Hardway in particular, have been affected by incidents involving anti social behaviour.

I met with the Gosport Chief Inspector to discuss the action the police and other authorities are taking to combat this issue.

Since this has been a problem in previous years, there is already a Public Spaces Protection Order (PSPO) at the site and police have Section 35 dispersal powers.

A PSPO order banning anti-social behaviour at Hardway memorial green in Gosport came into effect on 13 April 2018 and is in force from April to October each year. It does not ban anyone from gathering in the area or playing ball games, but is aimed at conduct capable of causing alarm, harassment or distress. It gives police or council officers the power to exclude people from the area for 12 hours. Anyone refusing to comply can get a fixed penalty of up to £100 or a court fine of up to £1,000.

A Section 35 Dispersal Order provides the police with powers to dispense individuals in order to remove or reduce the likelihood of members of the public becoming “harassed, alarmed or distressed” or “the occurrence of crime or disorder” in a particular area. Officers can direct people to leave the area and not return for up to 48 hours.

However, it doesn’t appear that either of these powers have been effectively used, which is particularly frustrating for residents affected by anti social behaviour and disturbing sights, such as a youngster sitting on the bonnet of a police car as it drove away.

The Chief Inspector has agreed that more needs to be done to stamp out this behaviour and has met with Gosport Borough Council to draw up a more robust plan of action.

Fundamentally the responsibility for the appalling behaviour of a small number of youngsters (some of whom are as young as 12 years old) lies not with the Police or the Council but with their parents.  It’s not unreasonable to expect parents to know where their children are and what they are doing over the school summer holidays. The police have CCTV images of the key perpetrators and have been meeting with their parents, I will also be meeting with them soon.

A more co-ordinated and joined up working between the Police, Community Safety and Enforcement and channels for quicker communications between these organisations agreed.  There will also be an awareness campaign to encourage parents to be better informed about their children’s whereabouts.

An urgent Police Action Group meeting will also take place including all agencies, including youth workers and a Crime Prevention Officer will carry out a site assessment of Hardway.

Other actions being considered are the installation of CCTV at Hardway either statically or a mobile van.

Gosport Borough Council already organise an award winning Summer Passport Scheme for youngsters age 11-16 for three week of the Summer Holidays.  In its 13th year the scheme is seeing record numbers of young people taking part in activities from fishing and water sports to cooking and brick laying.  The Council are now considering arranging water events at Hardway in the future as part of the Summer Passport scheme.

Actions will also take place to prevent this behaviour occurring next summer including schools visits by multi-agency personnel in May, June and July.

While police numbers are no doubt an issue in this case, matters were made worse by the fact that the Chief Inspector and his deputy were both away during this period.

Under the Government’s Police funding settlement earlier this year Hampshire Constabulary confirmed the recruitment and training of more than 200 new police officers, 65 Police Staff investigators, and training for a new cadre of PCSOs this year. The new Prime Minister, Boris Johnson has also announced funding for an additional 20,000 police officers.

I understand and share residents’ concerns surrounding this issue, but I would like to reassure them that all organisations are working towards ensuring that Hardway Green is an area that can be enjoyed by all.

I am also hosting a Crime and Policing Event which aims to inform the public on the organisations dealing with different crime & public safety, the challenges faced within Gosport regarding crime & public safety and what is being to reduce crime levels and increase public safety. The event will be taking place on Saturday 7 September between 1000 and 1200 at Thorngate Halls, Gosport and more details will be online soon.