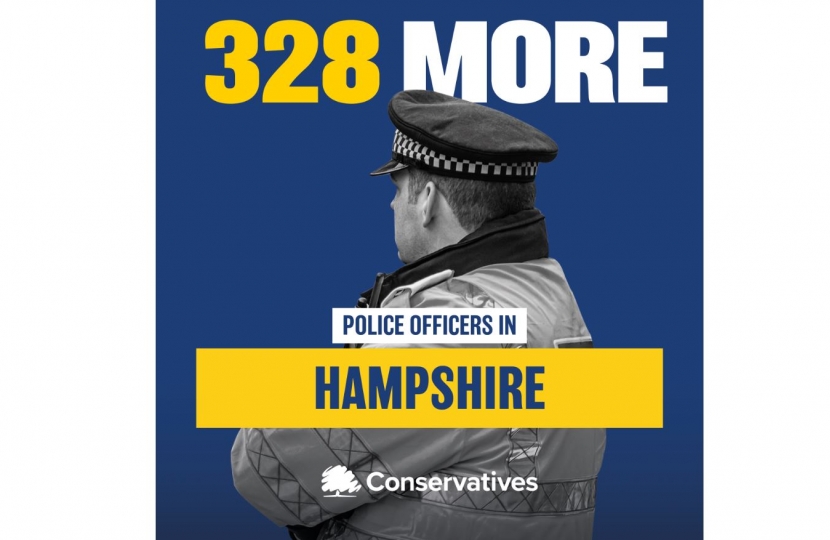 Today, new figures show that since last year there are 328 more police officers in Hampshire.

The news has been welcomed by Gosport MP, Caroline Dinenage, who was elected in 2019 on a Manifesto committed to driving down crime and recruit 20,000 more police officers to improve street safety.

This week, Caroline took part in a Facebook Live Q&A session with local MP Alan Mak as well as Police and Crime Commissioner candidate for Hampshire and Isle of Wight, Donna Jones, to discuss crime across the Hampshire area.

The 328 police offices in Hampshire are a part of the 8,771 police officers that have been recruited in the past year nationally.

In addition, figures show that there are 6,300 more doctors and 11,200 more nurses supporting the NHS in the past year. This brings the Conservatives a step closer to delivering on their other promise to recruit 50,000 more nurses.

“It is fantastic to see that Hampshire has recruited 328 new police officers over the past year to keep our streets safe.

“That is over 8,000 new recruits nationally, as well as over 17,000 more nurses and doctors providing vital care and support through the NHS.

“Thank you to all the police, health and social care workers across the Gosport Constituency who care for and protect our community.”