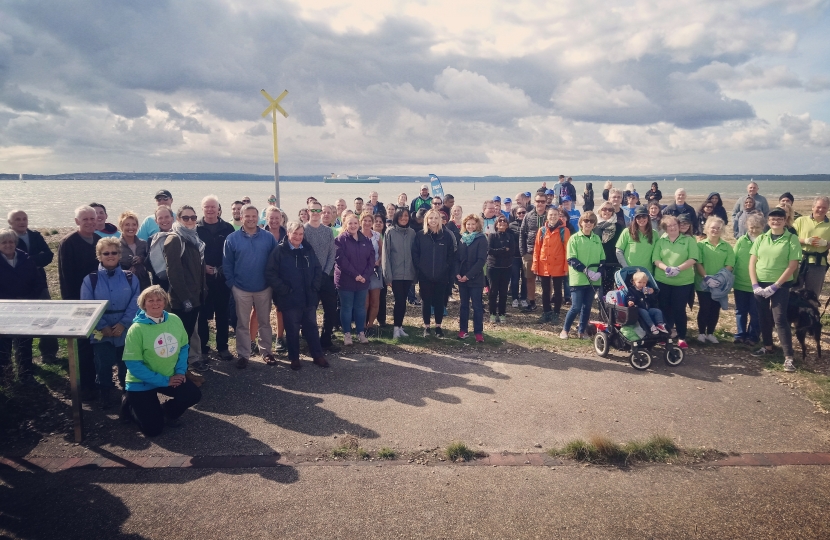 Caroline Dinenage MP says we must take better care of our seas as she supports the Great British Beach Clean.

Local MP, Caroline Dinenage MP, has joined the Marine Conservation Society (MCS) and over a hundred volunteers during a Great British Beach Clean event at Stokes Bay in her Gosport constituency today.

The Great British Beach Clean is the biggest annual beach clean-up and survey in the UK and is organised by the Marine Conservation Society. The event is now in its 25th year.

The Gosport MP joined 100 volunteers in picking up litter from Stokes Bay and recording everything that was found. Representatives from the Army, Air Force and Navy at HMS Sulton, Defence College of Technical Training also took part in picking up and recording litter.

Data from over 400 beach cleans around the UK, collected as part of the Great British Beach Clean weekend, will be used by MCS to tackle the issue of litter on beaches and try to stop it getting there in the first place.

Caroline Dinenage MP said: "As an MP for a coastal constituency, I see for myself on a daily basis the devastating impact of plastics in our oceans and on our beaches. Unless we take urgent action, there will be more plastic in our oceans than fish by 2050. We live in a fantastic coastal location and have a responsibility to take better care of it."

Emma Crane, Head of Public Affairs at MCS said "It was fantastic that local MP, Caroline Dinenage, could join us for the clean today and see how much litter – especially plastic – makes its way onto our beaches. And it was brilliant to see so many local people volunteering to help clean up Stokes Bay, it's vital that we all continue to work together to stop the tide of plastic engulfing our oceans."

The MCS beach clean event takes place every third weekend in September as part of the charity's year-round Beachwatch programme. Volunteers who got involved at Stokes Bay are joining an army of beach cleaners not only around the UK, Channel Islands and the Isle of Man, but all over the world as part of the global International Coastal Clean-up, which takes a snap-shot of beach litter across the planet on a single weekend.

Nationwide, this year's Great British Beach Clean is on track to be the biggest since the event began 25 years ago.

The Great British Beach Clean is being sponsored by Waitrose for the second year in a row – cash from their carrier bag sales in England goes towards supporting MCS' year round beach clean programme. MCS beach litter work is also supported by players of People's Postcode Lottery.