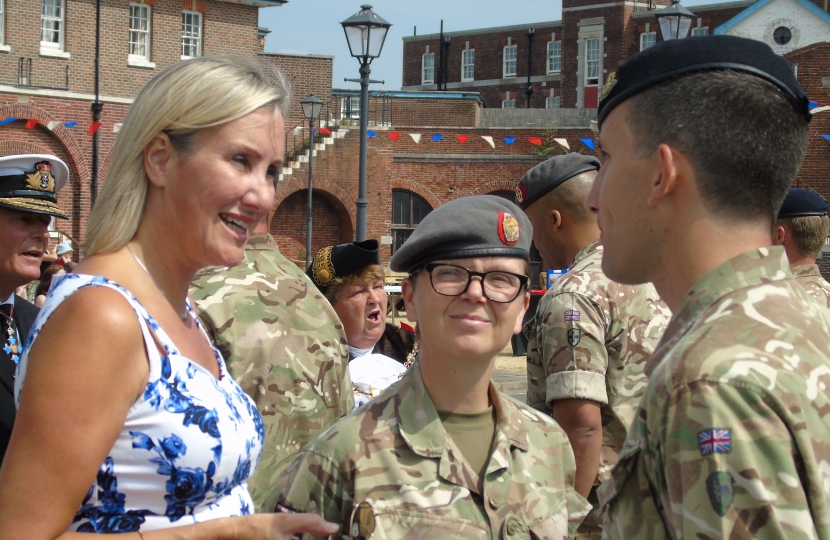 As MP for a constituency with a deep rooted military history, Caroline is committed to protecting the area's defence industry. She has frequently raised questions about local military issues in Parliament and has welcomed a number of Defence Ministers to visit important local military sites and businesses.

Caroline led a successful campaign for the restoration of the entitlement to Home to Duty Travel Allowance for service personnel travelling to work on the Gosport Ferry, promoting a more sustainable journey to work, and reducing congestion on key roads on and off the peninsula.

Following an increase of Service Family Accommodation complaints in 2016, Caroline raised her concerns with the then Minister, Mark Lancaster, and was successful in getting an MP's hotline set up so that constituent's issues could be resolved efficiently.

In the early days of her time as an MP, she successfully campaigned against the Defence Training Review which would have seen the Royal Navy School of Engineering at HMS Sultan moved to South Wales. However, in November 2016, the Defence Estate Review announced that HMS Sultan and Fort Blockhouse would be disposed of by 2026. Caroline strongly believed that the closure of HMS Sultan was not financially viable and urged the Government to reconsider its decision. In February 2019 it was announced that the closure of HMS Sultan would be delayed indefinitely. Caroline will continue to lobby the Government to ensure that HMS Sultan remains open.

Following the Defence Estate Review, Caroline set up a Taskforce with a view to plot the best possible outcomes for various Government sites that are being disposed of. Caroline has also welcomed a number of Defence Ministers to Gosport to visit various MOD sites in the area and demonstrate the best possible course of action for these sites, now and in the future. She also continues to host meetings between Gosport Borough Council bosses and Defence Ministers to secure disused land for development at Royal Clarence Yard.

As a member of the Armed Forces Parliamentary Scheme, Caroline witnessed first-hand the day-to-day work and challenges faced by our service personnel. Her visits to the Falklands and Afghanistan, along with UK military sites, have helped her to stand up for the Forces in Parliament– over the Armed Forces Covenant, war widows' pensions, R&R time and a host of other welfare issues. Caroline spent 4 years as Vice-Chairman (Navy) of the APPG for the Armed Forces, where she took steps to highlight the particular challenges faced by the Naval Service.

For almost a decade, Caroline campaigned to secure a medal for the veterans of the Arctic Convoys. While these heroic men endured dangerous and freezing conditions in WWII to keep the supply lines with Russia open, for over 70 years it remained the only major sea campaign of the war to not have received a dedicated medal. Caroline's campaign saw her lobby the Prime Minister and Defence Secretary, while also leading a debate on this issue in Parliament and contributing to Sir John Holmes' Military Medals Review. Caroline was delighted when the Government announced the award of the Arctic Convoy Star medal in 2012 - bringing a triumphant end to her fight for recognition on behalf of the veterans. Surviving veterans received their medals at the beginning of 2013 and widows and family members have since received medals on a rolling basis.

Caroline welcomed the 2015 Strategic Defence and Security Review (SDSR), which clearly committed to investing over £178 billion in buying and maintaining military equipment over the next decade. This includes at least 48 new F35 Joint Striker aircrafts, which will be fully operational on our two new Queen Elizabeth class aircraft carriers by 2023. The HMS Queen Elizabeth and HMS Prince of Wales are now in service and based at Portsmouth Naval Base. Caroline believes that this review was excellent news for the Solent region and will help protect local jobs. Annual reports on the ongoing implementation of the SDSR have taken place and you can find the latest version here.

Local MP, Caroline Dinenage, is delighted that Defence Secretary, Penny Mordaunt, has announced the highest pay rise for the armed forces since 2007.

Caroline Dinenage MP met Founder of Hounds for Heroes, Allen Parton, and his two assistance dogs, Rookie and EJ, this week in Parliament.

“This is the first, hard-earned, vital step towards securing the long term, sustainable future for HMS Sultan” Caroline Dinenage MP

Stuart Andrew MP, Minister for Defence Procurement at the Ministry of Defence, will visit Gosport on Monday to open a new Research and Technology centre at STS Defence.

Caroline Dinenage MP, is calling for veterans who were at the D-Day landings or in Normandy to apply for a free one-off trip to France to commemorate D-Day75.

Wartime stories are vital for Remembrance

In the year of the centenary of the end of World War One, Gosport MP Caroline Dinenage is urging constituents to engage with local Commonwealth War Graves Commission (CWGC) sites to learn more about the community links to World War One and Two.

Local MP, Caroline Dinenage, joined international maritime charity Sailors' Society to mark its 200 years of supporting seafarers and their families around the world at a reception held in Parliament yesterday.

"Gosport with its cutting edge engineering and defence industry apprenticeships provides great opportunities for the next generation." Caroline Dinenage MP

Caroline campaigns to Count Them In

Local MP, Caroline Dinenage, has declared her support for The Royal British Legion and Poppyscotland's 'Count Them In' campaign, which calls for the Armed Forces community to be included as a topic in the next Census.

Local MP, Caroline Dinenage, has today backed an information campaign for veterans of the armed forces and their families who, it is feared, are suffering in silence.